8 lessons from getting to the front page of Hacker News

A few days ago, our post to Hacker News unexpectedly went viral, resulting in a 20,000% increase in website traffic, hundreds of new users, new customers, new markets, and some great feedback on our product. All in the span of about 24 hours and for $0 in marketing spend. This article goes through our experience and 8 lessons we learned along the way on how to launch on Hacker News. 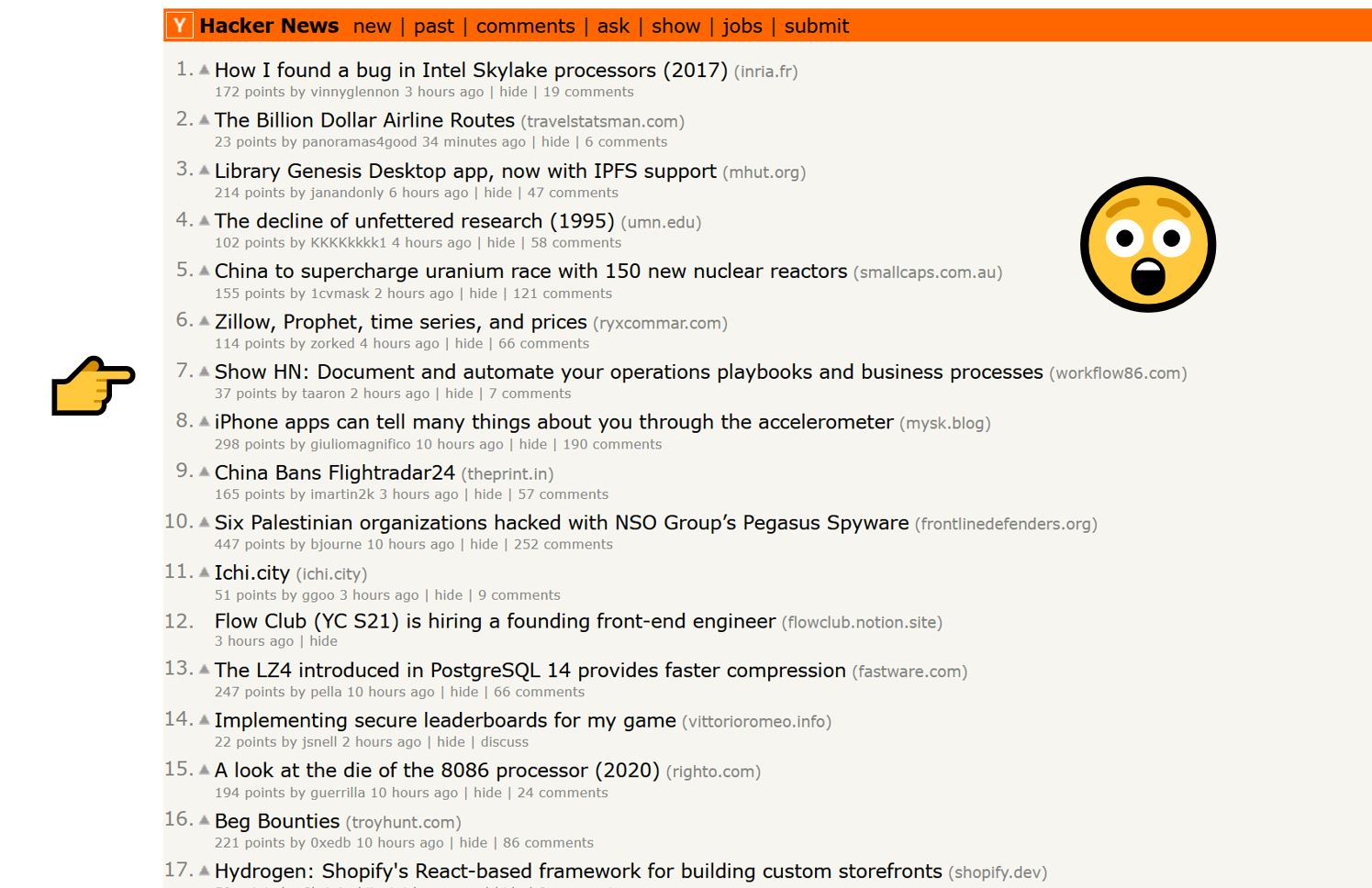 What is Hacker News?

Hacker News is a social news website focusing on computer science, entrepreneurship, tech and start-ups. It is run by Y Combinator, the well known start-up accelerator that backed companies like Dropbox, AirBnB and DoorDash.

It is estimated that Hacker News attracts more than 3 million views per day and greater than 300,000 daily users. Simply put, a lot of people read it and getting to the front page of Hacker News will often mean many thousands of users to your website or product.

Summary of our Hacker News experience

We made our post at 5AM Tuesday Sydney time. My expectation was that our post would go the way of most Show HN posts: 3-5 points, maybe 1-2 comments, and hopefully a few sign ups.

Things turned out very differently. Our post on Hacker News went to the front page about 1 hour after of posting, and stayed there for about 16 hours, getting 146 points in total and 44 comments. I recall we peaked at position 3 or 4 on the front page.

Over the course of 24 hours, traffic to our website increased by over +20,000% compared to the previous week.

The diversity and quality of the sign ups was pretty great – we had COOs, Head of Operations, Heads of Engineering and other people who were highly engaged with what we were building.

The exposure to the US market was fantastic. We acquired enough new users from the US for it to have a significant impact the composition of our user demographics.

We had multiple people from large enterprises reach out to us for demos and proof of concepts. These included Fortune 500 companies which I would have no idea how I would have gotten in front of otherwise.

So, all in all, we were absolutely floored by the result and the response. We got a massive boost in exposure, users, and customers from about 5 minutes of work typing up the post. Plus, all of this was free. The feedback and product validation we got was fantastic and will keep us very busy for a while yet.

You can find our Hacker News post here, though we go into why it is not a good idea to share a direct link to your post during your launch in Lesson 7.

🚩 8 lessons learned from our experience

Even though our post on Hacker News delivered way more than we expected, we made some mistakes that probably cost us even better results, and learned some very big lessons as a result. There are some peculiarities with posting on Hacker News compared to other places you might launch such as Product Hunt. These peculiarities need to be understood so you do not sink your effort before it even gets off the ground. So here are some of our lessons from launching on Hacker News for anyone who might be thinking about it.

Our first post actually got shadow banned and didn’t show up at all anywhere. We are not sure why, but we suspect it is because we created a user with our company name in it and used our company email as well. We think this triggered some sort of spam filter. On our second attempt, we created a user with my own personal email and a username that made no mention of Workflow86 and that got us through the spam filter.

✅ Lesson 2: Adapt your pitch to the audience

The Hacker News community is known for a few things. The first is that it is very technical. Many of its users and readers will be software developers, engineers, product managers, IT, and other tech roles. The second is that they do not hold back, and their feedback has been known to be brutally honest. We knew this before posting, so we did some minor tweaks and adjustments to our description.

If you read our introductory comment, you’ll notice that we broke it up into about 6 points:

(1) short story behind the product

Workflow86 was built based on my experience as a consultant and then running ops in my own start-up.

All teams develop specific ways of doing things – how they handle pull requests, respond to incidents, handle bugs, hire new employees etc. These processes are important, but they often don’t get documented, rely on lots of manual handling, and jump between multiple SaaS tools.

(3) description of the solution

Workflow86 is an all-in-one platform for building, automating, and managing your team’s operations playbooks and business processes. It comes with lots of built-in functionality so you can do more with just Workflow86, while still making it super easy to integrate with other tools when needed.

(4) description of how it works

You use drag and drop components to build out your process step by step with forms, business logic, document templates and more. It’s no-code, so non-technical team members (bizops, HR, admin, legal, risk and compliance) can set up playbooks and processes on their own.

Once a playbook/process has been built, you can run them automatically and at scale. Trigger playbooks automatically on a specific event, time, submission.

(5) cool or unique feature/response to feedback we expected

I also noticed that sometimes the problem is a lack of established playbooks/processes to begin with. So Workflow86 also comes with a bunch of pre-made playbooks you can download and run straight away in areas ranging from Cybersecurity to COVID-19 response. This is the other big feature of Workflow86 – the ability to easily package and then share entire playbooks and processes like a Notion doc.

Try it out and send any feedback our way.

We adapted our problem statement to refer to some more technical problems our product could tackle i.e. “making a pull request”. Point 5 was inserted after looking at posts from similar products. One major complaint was around how process automation is great only when you have processes in place. One of the strengths of Workflow86 is that we have an ecosystem where users can share processes, they have built like a Notion document, which means if you don’t have an established process, we can give you an example of one that is also best practice.

✅ Lesson 3: Prepare to go viral, even if you don’t

Our run at Hacker News was not entirely smooth sailing because we went into it without any expectation of going viral. This meant that we were unprepared on a few fronts. The crisis point came about 8 hours after posting, when our website actually got “hugged to death”: the server crashed because there was so much incoming traffic. Our website had been provisioned on a very tiny instance, and by the time we realized this, it was too late to upgrade it – this would have required we take down our website, upgrade it and then restart it.

We were down for a while, and in a demonstration of Murphy’s Law (what can go wrong will go wrong), this was exactly at the same time that I decided to take a nap because I had been awake since 3AM that day. We definitely lost out on a good chunk of traffic because of this.

In hindsight, we should have just bit the bullet and shut down the server in a controlled matter and upgraded rather than let it crash. Or even better yet, we should have upgraded our website in full expectation that we had a chance of going viral. Fortunately, our platform servers and services held up well to the influx of new users and activity.

So, while going viral on the front page is not guaranteed, you do want to make sure you are prepped for that possibility.

✅ Lesson 4: Time it for maximum exposure in the US

We posted at around Tuesday 5AM Sydney time, which corresponds to Monday 10AM on the US West Coast and Monday 1PM on the US East Coast. The majority of Hacker New’s readers will be from the US, and this was reflected in the demographics of the incoming traffic: approximately 70% of the incoming traffic to our website was from the US, about 20% from Europe, and the remaining 10% from everywhere else in the world.

Could we have done even better by posting say an hour or two earlier? Possibly. Our experience suggests it pays to get the timing of your post to align to somewhere on a weekday, and somewhere during working hours on a weekday.

✅ Lesson 5: Engage with the comments

Whilst the comment count does not seem to impact your ranking directly, but it does encourage people to engage with the post and discussion. It was worthwhile staying up to engage and reply to comments that people posted. This was also just great because a lot of the feedback and comments were very positive and demonstrated that people did understand and “get” what we had built.

This was one of the very interesting bits of feedback. We use an Intercom chatbot to engage with and qualify leads from our website. People did NOT like this chatbot, at least the people from Hacker News. I think the biggest complaint was that it constantly interrupted people’s experience of looking around our website. In hindsight, we should have just temporarily disabled this chatbot for 24 hours.

✅ Lesson 7: Be careful in how you use your network

Encouraging engagement from your network to boost your post on Hacker News has to be handled in a very nuanced way. Simply posting a link to your network and asking everyone to create an account and upvote it will apparently have the opposite effect – Hacker News will penalise your post and push it even further down.

The Hacker News ranking algorithm is designed to promote more natural engagement, and is supposedly designed to be difficult to “game” by just having a bunch of people you know upvote your post. This actually wasn’t a problem for us because we did not expect to go viral and so didn’t make a lot of effort to promote our post to our network.

About 6 hours or so after posting, we did ping some people for some support but realised there was a very specific way to do this. You DO NOT want to share a direct link to your post. Instead, you want to share a generic link to the front page of Hacker News itself or to the Show page of Hacker News, requiring whoever you shared it with to find the post “organically”.

We greatly underestimated Hacker News. In the span of 48 hours, it has helped us get a foothold in users and markets beyond Australia. If you are thinking about posting on Hacker News, I would highly recommend it.

Going viral on Hacker News is not a silver bullet for product-market fit, and there is still a lot of work ahead for us. But we are very excited by the new users, customers and use cases that came from our humble little post on an early Tuesday morning.

Get started documenting and automating your workflows in under 5 minutes